Made in Derbyshire - a launch and a farewell

After an incredibly varied two years as Derbyshire Poet Laureate, traversing our beautiful county from New Mills to Swadlincote, writing new poems and working with many groups along the way, I said goodbye to a wonderful role in September at the launch of 'Made in Derbyshire: Laureate Poems' in Chesterfield library.

It was a lovely evening, featuring readings from local writers and a taste of a poetry and flamenco performance I'm working on with guitarist Samuel Moore. I will miss being Derbyshire Laureate a great deal, but I'm delighted to have had the opportunity to capture some of my experiences in a collection of poems, featuring commissions, group poems and competition winning pieces by local authors.

Here's a sneak preview from the preface:

I was born in Sheffield and grew up in North East Derbyshire, close to Chesterfield. As a teenager, I used to hide in Chesterfield library on Saturday afternoons and devour the poetry section. I’d go back every week and find more new books to fire my growing passion for rhythm, metre and surprising images. And I’d try to scribble lines of my own. Thirteen years and a large helping of luck later, those scribblings became a first collection of published poems called ‘Division Street’. I moved back to Derbyshire and, from my small house in Hathersage, started to write about the landscape that inspired me and made me want to explore - I began to think about why places like Stanage Edge and Higgar Tor and Ladybower gave me the urge to put vague feelings into words.When I was given the opportunity to be Derbyshire Poet Laureate, I was honoured. I think I assumed I’d just carry on with the pieces I was trying to write about the moors and gritstone edges. I was wrong. I had underestimated the county I loved.

A day reading poems in every cafe the length of Chesterfield’s Chatsworth Road, ambushing the shoppers in Morrisons. A workshop with patients at Newholme Hospital, Bakewell, who taught me that Sheffield was ‘a dirty picture in a golden frame’. A visit to my old secondary school. A poem for Toyota, translated into Japanese. A poem for a football match. A week exploring the history of Eckington. A reading in a beautiful garden in Ashbourne, surrounded by rare flowers. A poem for a film about Shirebrook. A poem for a tea towel. These are some of the things I’ve done, but they aren’t the whole story either.

If you'd like to find out more about any of those strange and brilliant Laureate experiences, you'll have to buy the book! Please contact Ali Betteridge for more information about 'Made in Derbyshire'.

The last two years have been an honour and I've had the pleasure of working with so many great people. I hope I'll still get the chance to do so in the future, celebrating all things 'Made in Derbyshire' through creative writing.
Posted by D P L at 19:38 No comments:

The world's fastest tortoise (and other records)

On Friday 7th August, I worked with young writers at Ashbourne and Matlock libraries, encouraging them to invent some new world records all of their own. The workshops were held to celebrate 60 years of the Guinness Book of World Records, and everyone who attended got into the spirit of the challenge, suggesting weird and wonderful achievements they'd like to see, from the world's largest pizza to the world's smallest giraffe. We had a brilliant day, and wrote two group poems based on the record suggestions. Hope you like them!

Today, we broke the record for the longest chain of party rings,
the most puppets in a puppet show,
the most wigs worn on one small head.
We did the most flips on a trampoline
until we felt sick. We raced the fastest tortoise
in the world. We froze our fingertips, rolling
the world’s biggest snowball, then we stuffed our faces
with Victoria sponge, the most ever eaten in a minute.

When we blinked, it was the world’s biggest blink.
We balanced towers of tottering penguins on our heads,
made food with our feet. We found the quickest cow
to leap over the moon and we held onto it
and zipped over the clouds, the stars
like freckles as we rose. And best of all,
we did it all without leaving the library.
We let our pens give lift off to the world.

What am I?
Lift off my roof and find
the biggest window in the world,
the longest car drive
and the fluffiest cloud.
What am I?
I hold the smallest giraffe neck,
sand-coloured and bright,
the world’s smelliest cheese,
the longest rhyming rap.
What am I?
I’ve got the speediest snail,
the most yoghurt eaten
with a fork. I’ve got
so many manies
you can’t count them all!
I’m a library,
crammed with poets.
I’m every word
in the universe,
I’m everything
you thought
and didn’t say.

It was a real treat for me to judge the open category of the Buxton Poetry Competition again this year and even better seeing the winners receive their prizes at Derby University last night.

The 2015 competition had 'time' as its theme and as I read the entries I was reminded of Ezra Pound's remark that "an 'image' is that which presents an intellectual and emotional complex in an instant of time." In and out of time - great poems can change our perception of the present, make time speed up or slow down.

The winning pieces moved me and surprised me with their range, concision and memorability. Immersing myself in so many subtle reflections on time made me wish I could wear a poem on my wrist instead of a watch. 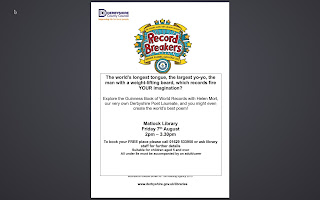 This summer, I'm very excited to be running two creative writing workshops on August 7th to celebrate the Guinness Book of World Records - one in Ashbourne and one in Matlock.

The world’s longest tongue, the largest yo-yo, the man with a weight-lifting beard, which records fire YOUR imagination?

Explore the Guinness Book of World Records with Helen Mort, our very own Derbyshire Poet Laureate, and you might even create the world’s best poem!


All under 8s must be accompanied by an adult/carer

I'm very excited to have had a sneak preview of a brilliant stone sculpture and mosaic made by the artist Andrew Tebbs for a new installation at Newton, near Tibshelf. This public artwork was made by Andrew after consultation with local residents and he passed some of their thoughts and memories about the Newton area on to me so that I could turn them into a short poem.

The finished poem, 'Who Goes There?' has now been carved into the sculpture - the first time I've had any of my writing set in stone!

Andrew mentioned to me that many people had spoken to him about nearby Tibshelf services and the fact that so many famous people have stopped there over the years. I wondered what would happen if a local lad from the distant past - the cotton spinner Jedediah Strutt - decided to pop by for a visit. My short poem was inspired by a strange convergence of cotton mills and service stations, Derbyshire past meeting Derbyshire present.

Who goes there, who goes there?
Jedediah Strutt with loom-spun hair,
stepping clean out of the air,
cotton-spinning, slow with care.

Who goes there, who goes there?
Fix the present in your stare.
we’re all Jedediah’s heirs,
weaving stories: homemade, rare.
Posted by D P L at 10:27 No comments:

As a writer who responds to Derbyshire landscapes so often in my work, I was thrilled to be invited to make a film discussing Wordsworth's poem The Prelude. The short documentary looks at the 'stealing a boat' section of Wordsworth's poem and we filmed it on location in Ullswater in December. As you'll probably be able to tell, it was a little bit chilly.

You can watch the footage here, hope you enjoy it.

Travels down the Staveley Corridor 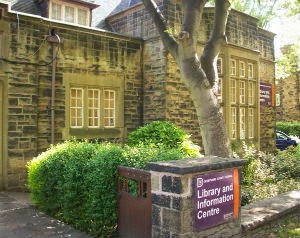 As someone who grew up in Calow, North East Derbyshire and lived there until relatively recently, I've always had reasons to go to Staveley - to visit the gym, visit the inn (!) or walk my dogs down the canal path. And on my journeys, I've often passed the beautiful brick of Staveley Library and thought it looked like an inviting place to stop for a while. Yesterday, I finally got chance to take it in as part of Staveley Wellbeing Day.

It was a real treat working with people from Staveley, Mastin Moor and beyond who use the Home Libraries Service. Inspired by the bookcases around us, we talked about the different 'chapters' of Staveley history, from pit ponies to hardware shops and turned these memories into a group poem.

Afterwards, everyone got chance to talk to playwright Kevin Fagan about a new community play he is writing for performance at Barrow Hill Roundhouse. Kevin has called the area he's writing about the 'Staveley Corridor' and I thought that was a really neat phrase. If you're from that area and would be interested in being interviewed by Kevin, do get in touch.

Thanks to all at Staveley for a great day.


The Book of Memories
A poem for Staveley Wellbeing Day

The first page is steel works, noise and smoke,
the sheds at Barrow Hill, solid as oak.
There’s a chapter of families, moving for jobs,
feeding the pit ponies, keeping them shod.
Shire horses paraded proud at the shows –
one met the Queen! – they stood tall in rows.

The story moves on, fast as open top cars,
the first on the road, fast-forwarding hours.
(Here’s a footnote for the Regal, the Staveley Pictures,
the dance hall in Chesterfield – twirling at Jimmy’s,
the stationers and Sonky Sales
where they traded in hardware, hammers and nails
and anything they didn’t have they’d find.
There were shoe shops and milliners, neat in line.)

There’s a new chapter now, the streets are fresher
and we chatter round books in the library at leisure.
There are more names to learn and we lock our doors
but we’ve shared the same story, through labour and wars.
We’ve written a book you can’t judge by its cover
and when this chapter finishes, we’ll start another.